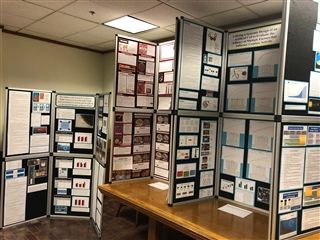 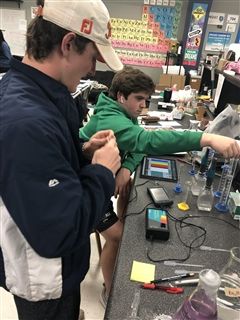 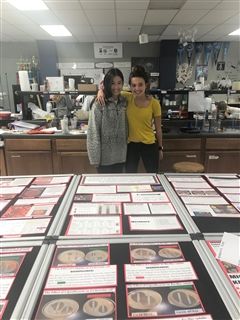 2/10/2020
The Cascia Hall Science Research Team will compete in the regional fair this week. You are invited to preview the projects and talk to the student research team members on Tuesday, February 11, 2020, at 7:00 pm in the Upper School main lobby. Here is some info on the students and their projects:
Seniors
Caitlin Nguyen and Sophie Pazzo (ISEF FINALISLT 2019) conducted research on the ability of prodigiosin, a red pigment produced by the bacteria Serratia marcescens, on reversing antibiotic resistance to selected bacteria. They examined several aspects of the properties of prodigiosin on inhibiting bacteria growth.

Zach Uhren, Jaxon Henderson and Jackson Pool, (ISEF FINALISLT 2019) conducted research on the effects on coenzymes on the activity of catalase enzyme, which is needed to remove oxidative stress in the body. In this research, the team looked at how Urea will denature the protein inhibiting function and how the presence of coenzymes, salinity, and acidity affect the renaturation of the protein returning it to function. The team is developing a “capsule pill system” that could help deliver treatment to the colon.

Luke Wilson (Oklahoma representative to the NJAS) evaluated the global challenge of coral bleaching. Luke specifically analyzed the ability of a calcium-rich buffer system to help in the recovery of UV light damaged coral. Additionally, he studied the changes in water quality parameters during the recovery process after UV light exposure.

Quinnlan Murray evaluated the sleep behaviors and circadian rhythms of selected juniors and seniors at Cascia Hall. She developed a survey to analyze behaviors and let students rate themselves as early morning, mid-day, or night owl behaviors. Additionally, she evaluated the student participants for the presence of the PER3 marker that has recently been associated with circadian sleep patterns.

Ellie Cooper conducted a project evaluating the mathematical relationship established by the patterns created by a fire burn over the extent of the fire outbreak. She utilized calculus to evaluate patterns created by the recent fires in Australia.
Juniors
Erin Coulon evaluated the effects of the exposure to an antibiotic to the RNAi expression in the C. elegans worm. C. elegans is a common model organism to study the effects of environmental conditions on the expression of genes. RNAi is a recently discovered phenomenon by which exposure to the environment can have an effect on the expression of genes. In this case, the interference caused the worms to become blistered and “dumpy."

Peyton Carter performed an intensive study of the heavy metal exposure still occurring in the Tar Creek Superfund site area in NE Oklahoma. Peyton evaluated the stream at the site of acid mine drainage and along the creek before it flows into the Neosho river and ultimately Grand Lake for water quality and toxicity. Additionally, working from the claim that beaver damns have the ability to help remediate the water system, Peyton evaluated the ability of mulch to remove heavy metals from solutions.

Steven Stagg and JJ Peters conducted an extensive evaluation of the challenge run-off created by herbicides have on the phytoplankton in river systems. The work included the design of a novel system that would “rain” water on the herbicide treated “lawn of grasses” to create the run-off to evaluate for toxicity on green algae. The work also included conducting the Q index (Water quality) for the herbicide run-off.
Sophomores
Ashlyn Milford evaluated the efficacy of four natural food supplements as potential treatments for celiac disease. Her work included using E. coli bacteria as a model organism of the digestive system ecosystem. Ashlyn evaluated the effects of the four supplements on biofilm formation and resistance to common antibiotics of planktonic cells. Additionally, she used the model organism C. elegans to determine how the four supplements affect pharyngeal pumping.

Labrini Panagopoulos investigated the bacteriostatic and bactericidal effects of different silver infused wound dressings that are often used to treat burns. She measured zones of inhibited bacteria growth of E.coli bacteria. Additionally, she compared her findings to data from the previous year to determine if the wound dressings were releasing the optimal concentrations of silver.

Ian Wilson evaluated what effect the addition of soft plastic would have on the diet of the small marine organisms. Ian analyzed the size change in copepods to determine the environmental effects that soft plastic would have on the larger marine ecosystem including coral reefs
.
Freshman
Josh Glasgow, inspired by wanting a way to help lower the emissions of trash incinerators, engineered an apparatus that allowed him to compare the efficiency of different filter methods on smoke. Josh passed the smoke through a series of filter methods and was able to determine which method collected the most particulate matter.
Back