Why is the Commando mascot a bulldog? 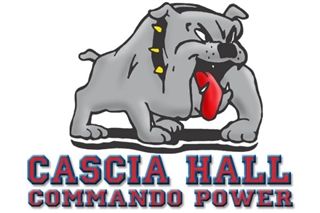 For more than 50 years the Cascia Hall Commandos have used the Bulldog as their symbol and emblem of what a fierce, fighting team they are on the field. The bulldog is seen on Cascia T-shirts posters, spirit ribbons, etc. Many Cascia alumni and present day students believe that Cascia Hall is associated with the bulldog because Fr. Henry Spielmann, O.S.A., used to bring his bulldogs to the football games. Fr. Spielmann recalls that he did bring his bulldogs to the games but he never had bulldogs until the 1970's and the tradition of the bulldog has been around since the 1940's.
Fr. Spielmann does remember that during World War II there was a Junior ROTC military program at Cascia Hall.  At a dress parade held on the Cascia campus, Fr. Driscoll, the first Headmaster of Cascia Hall, addressed the troops and told them they were, "Cascia's young Commandos!" From that day forward the Cascia Hall teams were known as the Commandos. According to copies of the "Cascia Gables" (the original name of the Cascia Hall student newspaper) from the 1930's, the teams were simply referred to as the "Blue and White" and "The Cascians."
The Commandos were an elite, British fighting force according to Hodding Carter's book, The Commandos of World War II.  No doubt when Fr. Driscoll called the members of the Cascia Junior ROTC "Cascia's young Commandos," those young men knew exactly what he was talking about.

The Commandos of World War II were expected "to be scouts, something more than ordinary--they had to be guerrillas who could stalk an unsuspecting foe (and) live behind the enemy's front lines."  Most importantly, according to Hodding Carter, the Commandos were prepared to "strike hard."  The Commandos were trained to be soldiers "as physically fit as the finest athletes and to think...solely in terms of attack."  In World War II, the Commandos earned nine Victoria Crosses, England's highest military award for heroism, 162 military crosses, 32 Distinguished Conduct Medals and 218 military medals."  Doesn't this sound reminiscent of all the District and State Championships our Cascia Hall Commandos have brought home in various sports.  Doesn't the record of the British Commandos also sound very much like the number of academic and scholastic achievements of Cascia Hall Commandos off the field?

The symbol of this highly trained military outfit was the Bulldog. The "bulldogs" of the British army were the Commandos. Even though at times the British bulldog was sorely wounded, it still had strong fangs and, like the bulldog, once locked in battle, the Commandos always hung on with “stubborn courage.”